From Rapid Prototyping to Large-Volume Production: The Future of AM w/ Ed Graham

Ed Graham, Vice President of Additive Manufacturing at ProtoCAM, has been in the AM industry for a long time. He started with ProtoCAM back in 1996, shortly after the company began, and just 10 years after the first 3D printing technology was patented. Graham experienced an evolution in the methodology of the industry, as it developed from rapid prototyping to rapid production manufacturing. Alongside this industry evolution, Graham helped ProtoCAM to develop as a company and steered it towards its current offering of unique production solutions. Discover Graham’s thoughts on the evolution of both the industry and ProtoCAM, and where both are headed into the future.

Interviewer: Where is the additive manufacturing industry now compared to 10 years ago?

Ed Graham: The most direct answer to that is that we’re now geared more towards end-use production, versus ten years ago, when we were primarily using the technologies for prototyping purposes. Ten years ago, we were an industry known for rapid prototyping, and today we’re known for production additive manufacturing.

I: Where is ProtoCAM now compared to 10 years ago? 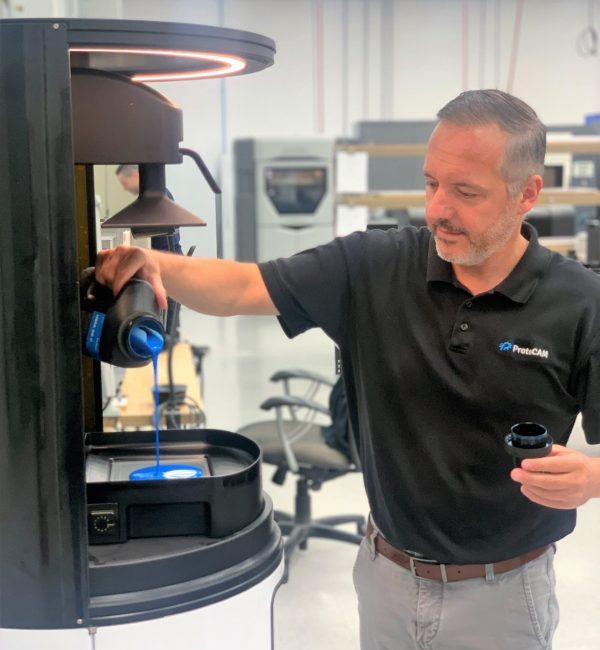 G: Definitely a similar answer. We were initially a Stereolithography (SLA) house—that was our main technology that we utilized for a long time, and again, it was primarily for prototyping. Then we started to learn about these new technologies like Multi Jet Fusion (MJF), and noted the advancements in technologies and materials, and we realized that the industry was going to move towards end-use production. We saw where this was heading, and we wanted to get in on it early.

SLA is the grandfather of all technologies, it’s THE one that started it all, and it’s the one that ProtoCAM cut our teeth on. And it’s interesting, because maybe 10 years back, SLA had this reputation of parts being delicate, being brittle, and not something that you would use for any type of end-use, but even the landscape of SLA has changed now. Over the last 2-3 years, photopolymers have really changed. Carbon® was probably the company that really changed people’s impressions of photopolymers and what was achievable. They started to open the eyes of other companies that were in the photopolymer space, who then started to research and advance materials in that realm. Even in the latest shows, like at the RAPID show and AMUG last year, you could see a transition of more people talking about photopolymers. There have just been a lot of changes in the photopolymer arena as they move towards faster speeds and build times and more production-worthy materials.

The SLA photopolymer world took a long time to get to where it is today, but I think it wasn’t until it was pushed by these other technologies that it really started moving. It wasn’t until HP came out with Multi Jet Fusion and it started being used for production that they realized they could probably do that with photopolymers, and they went back to the drawing board. I think that MJF, along with Carbon’s introduction of DLS really helped shape the industry today. Carbon has also pushed the industry to make changes to get better and be more inventive and recreate this space.

Additionally, some interesting things in the industry have changed with the influence of COVID and now all these recent supply chain issues. 3D printing was perceived as coming to the rescue in a lot of instances during the pandemic, and now we’re running into companies that are having a lot of supply chain issues and they can’t get product, so now they’re looking to us. Before, the general perception was that you don’t really use 3D printing for production, but now companies are in all these situations where they can’t get this and they can’t get that, and they’re taking a harder look at 3D printing and its capabilities. Before, we were trying to change existing parts into 3D parts for these companies, and now we have the opportunity to work with them to develop a product with 3D printing in mind from the beginning. It’s paving the path for us to be a viable manufacturing solution and to get into these streams early instead of trying to retrofit older parts to the technology. Now, the perception is that 3D printing deserves a seat at the table, and more and more companies are seeing it as a viable solution.

I: What trends do you see happening now that you think will evolve to be big in the future?

G: Metal is definitely still a big ticket item; in the industry, it’s still a very big topic. There are lots of larger scale companies putting big money into it, and wherever there’s big money, there are a lot of people that are interested. With aerospace and automotive, and especially with conditions like we’re experiencing in the world right now with the cost of fuel and oil, any lightweighting that can be done is a huge savings. We’re also entering into a new era of electric vehicles, and the batteries are heavy, so they want to take advantage of ways to lighten the vehicle without sacrificing strength. Additive also comes to the table when you talk about doing that because you can lightweight structure and create things that would have traditionally been very difficult to create.

The medical device sector has always been good for our industry, too, because these are the areas that have high value, low volume requirements, which is our niche. Overall, the AM industry is definitely changing the landscape of manufacturing as people are starting to look at 3D printing and additive manufacturing as viable solutions for production.

I: Where do you see the industry headed in the next 10 years?

I definitely see further advancements in production applications. Right now, the biggest hang-up is that people will look at a part that they get off an injection mold and they’ll say, ‘wow this part costs a dollar, but your part is 15 dollars.’ One thing that they don’t ever really look at is the total cost allocation; they’re not looking at the upfront tooling that was associated with the injection-molded part, they’re not looking at the inventory space that all these parts now need. Additive allows for the ability to print on demand and on-site with decentralized manufacturing. As these technologies get pushed into the mainstream, that will also drive costs down. If you want a million pieces of something, you’re probably still going to injection mold, but if there’s an application where it’s very difficult to mold, there are still reasons where additive might be a better solution. I think we’re going to continue to push the boundaries of production.

The additive world also needs more standardization and rules. Questions arise like, what’s the verification across printers, what are the standards, how do I know that my part was made the same at your facility as at this other facility, how will part orientation differences influence the final part; a lot of this stuff can come into play. I think as an industry we need better standards, and this is definitely being worked on, especially for automotive, in aerospace, and in medical. There are a lot of quality and standards that are important in these areas because people’s lives are involved. At the end of the day, they can’t have a part where it’s unclear how it’s made. As an industry, if we can come together with better standards, I think that will help us to advance as well.

I: How do you plan to help ProtoCAM evolve in the next five, ten, 20 years?

G: I definitely want to assist more with standardization, and help this technology to go mainstream with companies. I want to help them decide on the right technology, the right process, and further automate our processes at ProtoCAM as well. Automation gives consistency to processes–it takes that human element out–and the more we can work towards wholesale automation on our processes, the more easily we will be able to move into higher-volume production. That’s why we’re working with companies like DyeMansion for post-processing automation and 3YOURMIND for process workflow automation.

I’d love to see us function at the capacity of an injection molding house, with people coming to us for final production parts and being able to make huge quantities of parts. We would have all the standards in place, with the quality and the ISO certification, functioning as a legitimate manufacturing facility. We don’t have to be stuck in this, ‘well you guys only do prototypes’ type of work. We want to be looked at as a full-on production manufacturing company, and we’re constantly working to better orient ourselves towards functioning in that capacity.

Learn more about ProtoCAM’s latest innovations and automations by staying tuned into our news page, blogs, case studies, and more in our learning center.