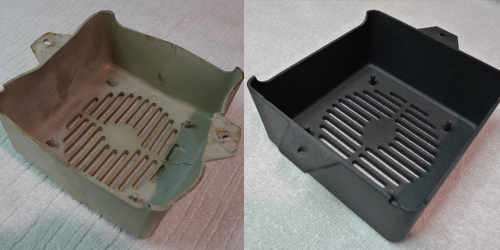 Carl Moon, Vice President of Operations at Weldon Solutions, had a rather simple problem: he was looking for a particular part for an antique car. But the solution was a bit more complex: the part was rare, and those that were available had seen considerable wear over the years. With the original part no longer in production, and existing copies warped with time, Moon turned to 3D printing and ProtoCAM to aid him in creating a replacement he could showcase.

Moon is a collector of a special type of automobile: British-made Sunbeams. During the last year of production in 1967, these sports cars’ radio option came only with a small plastic box to house the speaker, which was installed by the dealers at the time. Unfortunately, production of these special cars stopped that same year, and as time went on, the housing boxes saw increasing wear, as they had been designed from rather inexpensive plastic as a cost-saving measure. Additionally, the radios that were original to the car were most often replaced with FM radios and multiple speaker systems, so the original radios and housings were most often simply thrown out. Finding a replacement proved to be a tricky endeavor, as original parts became quite rare. “I’ve only ever seen two for sale in over 30 years,” Moon notes. 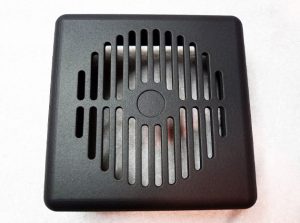 Wanting to present the best version of his rare vehicle as possible, Moon searched all over for solutions, and eventually found an original housing. “[It] was in really bad, bad shape, and it really couldn’t be used,” Moon recalls. But he had an idea to take advantage of a manufacturing technique that utilized the original housing while creating a more solid, durable version: 3D printing.

Planning Out Production for a Legacy Part

Moon began considering the possibilities inherent within additive manufacturing, as his company, Weldon Solutions, had previously purchased a 3D printer for use in their own facility. “We actually used [ProtoCAM] as a reference,” Moon said of Weldon Solutions’ decision to buy their own printer. They were able to check out the pricing and capabilities ProtoCAM offered before deciding that they were better suited buying their own in-house printer for their smaller, less complex projects.

ProtoCAM also offered a particular service unique to the additive manufacturing method of production: bringing new life to legacy parts. The term “legacy part” is used to describe any part that is no longer being made by a manufacturer, like Moon’s automotive speaker housing. Legacy parts can be beautiful and intricate examples of how parts used to be made, but the trouble begins when these parts begin to deteriorate with time. With the manufacturer no longer producing replacement parts, the owner of the legacy part is left to search for the rare parts that may have endured through time, or pursue custom replacements that are often quite expensive.

Enter 3D printing, a far more cost-effective way to reproduce and revitalize legacy parts. The 3D print process allows for reverse engineering of the original part for accurate reproduction. Once the part is digitally reproduced, it can be manipulated and repaired using 3D CAD programs, and even improved upon, as ProtoCAM has demonstrated in several past projects.

Now better aware of what was possible with 3D printing and additive manufacturing, Moon began drawing up a 3D model based on measurements from the older housing he had bought, paying close attention to each small detail left from the original molding process. Moon passed the file over to a Weldon Solutions’ mechanical engineer, who first tried printing the housing on his own at-home printer. The print was a success, but Moon found the first attempt to be rather weak, with a very rough surface from the layering that is inherent with many smaller, at-home printers. Hoping to replicate the part as closely as possible, Moon began investigating a smoother, more durable printing solution that would create a part that could last a lifetime, and looked presentation-ready, too.

Acting on a suggestion from his mechanical engineer, Moon looked into Multi Jet Fusion (MJF) technology, which would offer the strength and superior finish he was searching for. “He suggested [MJF] because it’s not the most expensive, but it would create a nice, consistent finish, and it’s fairly strong; and, I could get it black; black is what I wanted,” Moon says of taking this new direction.

Moon worked on several iterations of the housing before handing off his 3D model to the engineers at ProtoCAM to produce the piece. Moon cites the high level of professionalism and customer service demonstrated at ProtoCAM as being particularly satisfying to his experience. “I was so impressed, because Jessica was so nice about, ‘hey, make sure you send this and get another quote so we don’t mix up the files,’ because I was worried about that, and it just worked out perfectly,” Moon says of his experience in discussing various iterations of his model with the ProtoCAM team.

The finished product, which Moon received within just two days of sending his final iteration, was a new, sleek, and strong recreation of the original legacy part. “The finish and color were better than I ever imagined,” Moon reflects. “It was a perfect application; it was molded years ago fairly complexly, and [ProtoCAM] was able to replicate it perfectly,” Moon says of the final piece.

Moon now hopes to share his 3D file with other Sunbeam collectors so they too can reproduce the part and restore their Sunbeams to their former glory; he also notes how his positive experience with ProtoCAM means he will point those wishing for a strong, detailed part to turn to the Allentown additive manufacturer for production of their parts.