Revolutionizing the Welding Industry with The Tack Shield

When Mary Ann Terranova took a welding class as an elective in college, she would have never guessed that 30 years later, she’d be patenting and creating her own welding shield device. But that’s just what happened as she rediscovered the art of welding in retirement, and happenstance would lead her to bring The Tack Shield to life.

Learning a New Skill and Discovering an Innovative Device

As she dove back into the world of welding, Terranova recruited the help of a professional welder, Steve James, to help her learn more about the craft. James utilized a unique device while welding that Terranova immediately took an interest in. “He pulled out this thing and hooked it onto the torch,” says Terranova of the device. “I said to him, where do I get one of those? And he said, oh no, I just made this.”

It was a revelation to Terranova. She immediately pitched the idea of a partnership with James to patent the device, and he accepted as a silent partner. From there, Terranova began moving forward with the patent process, and researched options for production and prototyping.

The device itself is a true innovation in the welding industry, and unlike any other protective device available. It is primarily designed for “tack welding,” a type of welding where one would do simple attaching of items together, in applications like creating small sculptural pieces.

Terranova describes the typical protective equipment used in welding as not ideal for this sort of short-form welding: “When you weld things together, you wear a big helmet, and the helmet covers your whole head and it’s very clunky,” Terranova says. “Then in [tack welding], usually what they would do is, without a mask or a helmet, turn their head to the left and just shoot the gun,” Terranova continues. “This is a technique that can only really be done well by professionals, and it’s generally not recommended, as it can be dangerous.”

The Tack Shield creates a safe barrier between the welder and torch, without the clunky nature of a full helmet. “[The Tack Shield] hooks onto the torch or the gun… and you can literally just look through the lens at where you want,” Terranova says.

Partnering Up for Prototyping and Production 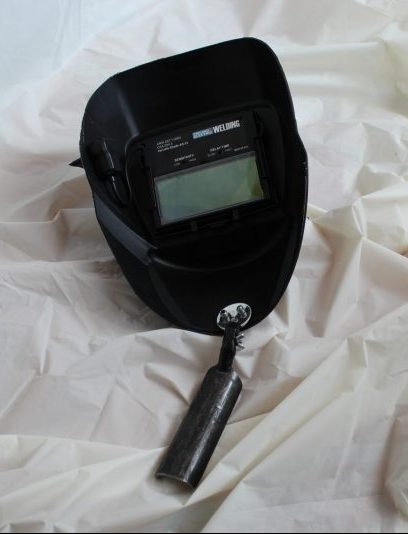 A prototype for The Tack Shield

Having acquired a patent, Terranova began researching options for the project, and headed to a conference in Ohio, where she met with several manufacturing experts and learned more about the materials she might want to use and the production processes available. One of the attendees at the conference connected Terranova to ProtoCAM and Vice President of Additive Manufacturing, Bob Holbrook.

From there, Holbrook worked with Terranova to get the unique device designed and to produce the best version of the product, testing several prototypes and materials to ensure the shield would fit as many types of welding torches as possible. Consideration was also given to the nature of the finished product, as it would need to be somewhat fireproof given the welding environment.

“Everybody [at ProtoCAM] is so wonderful,” Terranova emphasized. “I told them, I’m walking in the dark here, I really don’t know what I’m doing, and it’s one step at a time, and they followed me through this whole thing. I feel like they all know me, and it’s nice to have that kind of relationship with a company because it gives me the confidence to know they’re going to tell me right or wrong, which way I should go, and what I should do next. They really have been terrific,” Terranova says of the entire ProtoCAM team.

On additive manufacturing, Terranova highly praises the process for its exceptional production process capabilities. “[Additive manufacturing] worked for me, and it worked really well because it’s an inexpensive way to see if you’re on the right track. That was key to my forward movement; if we had to do another prototype or version, it was quick and easy,” says Terranova. 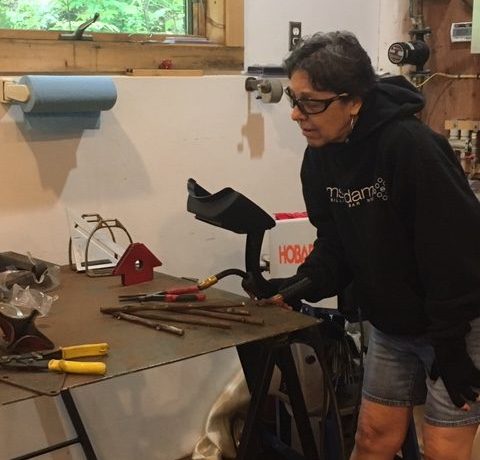 Over the last year, Terranova has built out her marketing materials for The Tack Shield, setting up a website and promotional videos showcasing the product, and this fall she just attended her first trade show to promote the final product. “It’s all a matter of getting the information out there in order to get people to look at it,” Terranova says. “As people walked by my booth, just saying, ‘would you like to try tacking without a helmet,’ got their attention. From beginning students, to people who have welded all their lives, they all tried the device in my booth. I made great connections…it’s moving now and it’s really real!” Terranova continues. “We’re a real company now, and I do owe a lot to ProtoCAM.”

With her newly formed connections from the trade show and her ongoing marketing efforts, Terranova foresees the project continuing to grow and has high expectations given the warm response to The Tack Shield she has received thus far. “We’ll see where this goes, but like everything, I’m just grateful every day for another day to try!” Terranova says.

To learn more about and to purchase The Tack Shield, visit https://thetackshield.com/.