ProtoCAM has worked on many rapid prototyping projects where design for manufacturability (DFM) was important to the project.

ProtoCAM has experience with rapid prototyping for handheld devices, small electronic devices, medical devices, and aerospace prototyping, but this project is the only project that combined all of these aspects into one prototype. 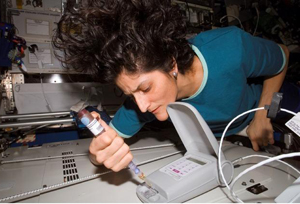 Charles River Laboratories worked with ProtoCAM to quickly develop a handheld medical test device to be used for scientific testing on NASA Space Shuttle flights. The device would be used during space flights to perform microbiological tests on horseshoe crabs. Charles River Laboratories’s Rapid Micro Products use their Endosafe™ technology in multi-functional, point-of-use test systems (PTS), which they call a “”lab-on-a-chip.”

ProtoCAM’s prototyping engineers were able to use their vast experience with design for manufacturability and DFM engineering to suggest a few design improvements pertaining to the manufacturability of the device. Specifically in this design, which was fit and functionally well done, ProtoCAM suggested form improvements, such as:

The end result was a stronger piece that was easier and less costly to manufacture.

The device consisted of four plastic components along with the printed circuit board and keypad.  Using stereolithography, ProtoCAM created SI 50 SLA prototypes for testing with the electronic components.  No RTV molds were needed.  ProtoCAM did the rapid tooling to move quickly into the injection molding production process to produce about 2,000 sets. The entire process was completed in less than five weeks.

Charles River Laboratories’ handheld medical test device prototyping was completed within the project schedule and was deployed into production in timely fashion.  The Endosafe™ device was successfully used at NASA’s Marshall Space Flight Center and in NASA’s space shuttle for microbiological testing of horseshoe crabs.

Please visit the Rapid Micro Products section of the Charles River Laboratories website to learn more about their Endosafe™ devices.