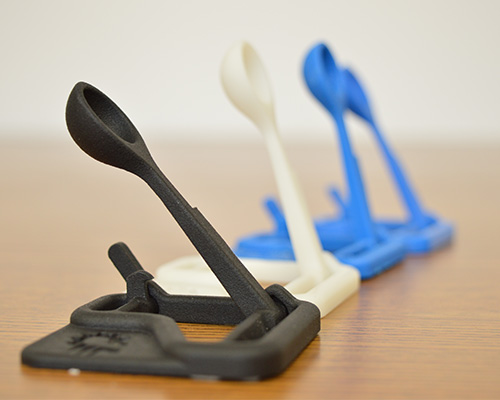 As a part of a recent event at Da Vinci Science Center, ProtoCAM set out to make 3D-printed catapults while testing which material, print method, and orientation would work best for this somewhat tricky design.

The criteria for these specially-created catapults were somewhat specific. Since the catapults were to be given out as prizes to children, they would need to be durable enough to withstand continuous, rough use. They would also need to be relatively smooth without any sharp edges that might lead to injury, in an appealing color that represents the ProtoCAM brand if possible, and quick and simple to produce and finish. Finally, we wanted to impress with these prints, so a catapult that launched items as far as possible was ideal.

Iteration One: ABS on the uPrint with Upright Orientation

The printstyle was utilized for convenience and style. The uPrint was the most readily available printer available in our workshop for this isolated build, and the blue color of the ABS would result in a fun, eye-catching print. The upright orientation was chosen as the most obvious choice for strength in the construction, and allowed for minimal cleanup.

Results: This was a good option and was aesthetically pleasing, but we found that after continued use, it tended to break at the bucket, or head of the catapult. It was determined that too much strain was being placed on this area because of the orientation of the build. We thought that changing the orientation might lead to better strength and a better build, with durability for continuous use.

Iteration Two: ABS on the uPrint with Sideways Orientation

This printstyle was chosen for the same reasons as Iteration One, but had an emphasis on the different orientation during the actual print. Where iteration one had horizontal build-lines, this version would have vertical lines. We hoped to gain better strength at the point of weakness we encountered on the previous iteration (just under the catapult bucket) and reduce breakage.

Results: This print was a disaster. We gained strength in the previously weak area, but developed a devastating weakness in the main hinge of the catapult that resulted in immediate breakage upon first use.

Iteration Three: Accura 25 on the iPro

Stereolithography (SLA) seemed like an obvious next step to preserve aesthetics and ease of print and clean up. Though we would lose the blue color in this build, the iPro and Accura 25 material would produce nice, crisp edges, minimal noticeable build lines, and a clean logo, and also provide strength to the design.

Results: This was a solid build, and was as aesthetically pleasing and durable as expected, although we experienced some problems with the locking mechanism. Even after continuous use, there was no breakage. The main problem was that the catapult needed to be locked and loaded carefully, as it would continuously not catch and lock as it was meant to. This was a result of too much flexibility in the catching piece, and the slick nature of the material. The design could have easily been altered using CAD software to extend the catching piece so that the arm of the catapult would catch easier, but we decided to test one more material.

We were most excited to try this build, as we knew it would produce a clean product with minimal cleanup. The MJF would also allow us to produce a significant volume of catapults thanks to the Multi Jet’s volumetric printing ability.

Results: The MJF printer produced the best result of the bunch. There was no breakage after continuous use; the catch and locking mechanism functioned perfectly every time; and the finished piece was very crisp and clean. Cleanup of the parts was a breeze, as they just needed to be removed from their powder bed and bead blasted clean, and the parts were produced quickly, with no wasted material.

With all our materials, printstyles, and orientations tested in terms of aesthetics, strength, and durability, there was one last factor to test; the distance of our catapults’ launched objects. For this challenge, we test the catapults by launching mini marshmallows across a 20-foot space, testing each print three times (the uPrint Sideways Orientation print was not tested, as it broke immediately upon first use). 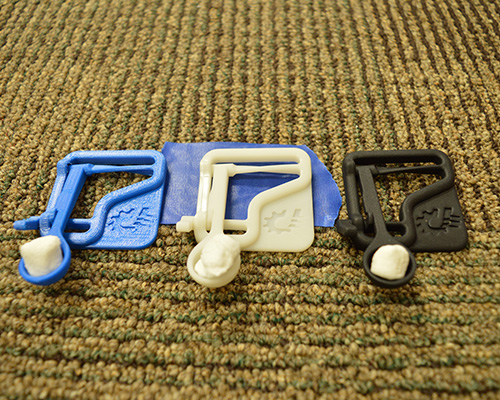 Results: The MJF printed catapult faired the best, as expected, with increasing scores (15′, 17′, 18′) with each subsequent launch. This catapult also launched marshmallows on a fairly straight and consistent course.

The SLA print also did well, matching the distance of the first MJF launch at 15′, but then varying in its subsequent launches (13′, 17′). This catapult often shot wildly, tending to launch to the right and leading to marshmallows landing all over the testing space. The inconsistency that accompanied this print proved that this wouldn’t be the best material/printstyle to utilize for kids.

Finally, the fused deposition modeling uPrint build did the worst, though it still covered a fair distance. Its first launch landed 13′ down the testing space, while subsequent launches worsened in terms of distance (11.5’, 10′). We deduced that this might be due to the increased pressure on and wearing down of the hinge of the catapult, which, upon further testing, would spring back to full-use after a rest. But, as one of our goals was durability over time with continuous use, this was another fail.

And the Winner Is… 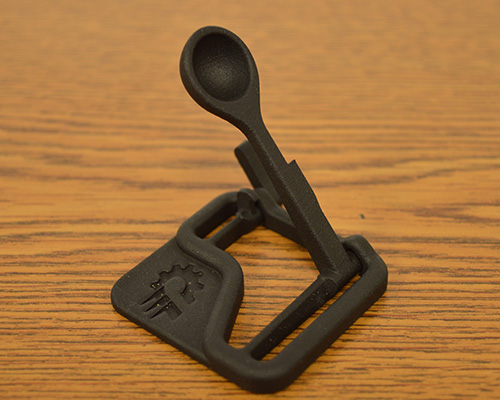 The Multi Jet Fusion-printed catapults won this case study! We took these black beauties to the Da Vinci Center event and they were a huge hit. Our testing ensured a great product for many uses to come, in a neat and crisp package that would be a great showcase of our products.

To learn more about all our printstyles and materials, visit our services page at https://www.protocam.com/additive-manufacturing-services/.