AM for Production: From Prototype to Finished Part with DGH’s Scanmate Flex

As a producer of ophthalmic diagnostic equipment, DGH Technology has a specialized customer base, and produces and sells several hundred of each of their products each year. As a company with lower-volume requirements, when DGH was searching for a way to produce their newest product, the Scanmate Flex, they turned to ProtoCAM for help in creating the unique housing for the product from start to finish.

Initial Production for a Specialized Field

Earl Henderson and Luther Detweiler, co-owners of DGH, started the company back in 1982, creating ultrasonic diagnostic equipment for different ophthalmic procedures. “Principally, we started out in refractive surgery for people who are nearsighted and needed to try to get rid of their glasses, and ultimately we got involved with other types of diagnostic ultrasonic equipment that are used to obtain highly precise measurements of the eye prior to cataract and refractive surgery, and also the measurement of cornea thickness for glaucoma screening.” Henderson says.

The company expanded its offerings as time went on, producing imaging technology called B-Scans which are scanning imaging ultrasound devices used to image the entire eye and detect foreign bodies, floaters, detached retinas, and other conditions of the eye. 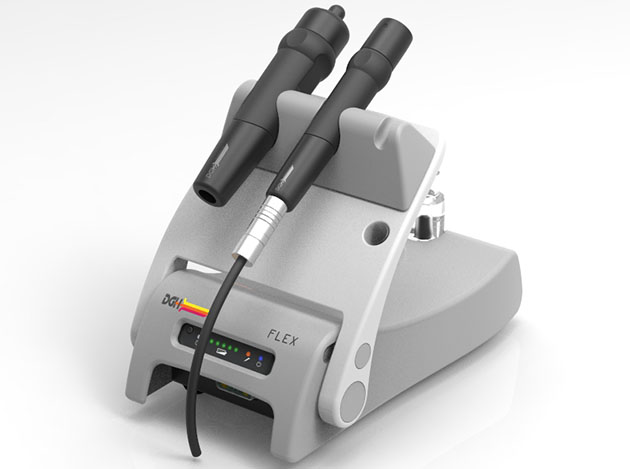 Searching to expand their offerings further, the Scanmate Flex was proposed as DGH’s newest product. “When we decided that we needed to develop the Flex product line, one reason was that we didn’t have an Ultrasonic Biomicroscope (UBM), which is a very high frequency scanning ultrasound device which is used for looking at the front or the anterior segment of the eye for people who have narrow angle glaucoma or other issues where they want to have a much better definition of what the front of the eye looks like,” Henderson explains. “We had not been in that arena, and the other reason we decided to get into it was we had previously worked with a company who made a very unique and novel approach to a B-Scan.”

The approach involved a B-Scan device that images the whole eye from the front to the retina, and which had all the electronics located in the handpiece. The device would be plugged into the USB port of a computer and would utilize DGH’s unique software. Unfortunately, the mechanical design of the handpiece was not particularly robust and came with reliability issues and a short field service time before it had to come back in for repair. Knowing that reliability was something the company was best known for, DGH decided to expand their product line and develop a new product that utilized this new UBM capability, and also to develop a more reliable B-Scan.

“A lot of people wanted more than just one piece of equipment, so with this product, we wanted to give them an opportunity, and hence the name, for them to be flexible and purchase a UBM, or B-Scan, or A-Scan, or a combination thereof. Our goal was to develop a flexible building block system where a customer could make a purchase depending on their specific requirements,” says Henderson.

“The core of our talent at DGH is electronic design and software design development,” Henderson says. “We’re not industrial engineers, and we decided that it was in our best interest in the development of the Flex housing to go to a design group to help us design a piece of equipment that was ergonomically and aesthetically pleasing, as well as cost-effective,” Henderson recalls.

DGH contacted Juliana Design Group, who aided in product development and engineering of the device, and also assisted DGH in creating the final design of the product as far as both the ergonomics and the aesthetics were concerned. The design group also worked to meet DGH’s needs in creating a product that met medical regulations and would be ideal for short-run production. When it came time to fabricate a prototype, the design group recommended ProtoCAM as a good source for further product development.

Housing for the Scanmate Flex

At ProtoCAM, DGH worked with engineers to determine the best mode of production based on their unique needs. “The dilemma that we always have is that going to injection molding is a very expensive proposition with the tooling and the iterations that are required to get the molds correct, and we figured it was probably more prudent for us not to go that route initially,” says Henderson.

Because of the smaller volume needs of their product and the fact that they would likely need to go through several redesigns, DGH and ProtoCAM came to the conclusion that a combination of stereolithography and urethane casting would be a better route to take for this project. DGH and ProtoCAM worked through various iterations of the project and developed the prototype into the design of the final housing, which ProtoCAM currently produces, and including the full finishing, decal, and painting work. Once the housing is complete, DGH simply marries the electronics and handpiece to the housing, and the product is complete.

As for what’s on the horizon, DGH is considering making the leap to injection molding with the Scanmate Flex, which Henderson would also look to ProtoCAM to assist with, given that ProtoCAM’s expertise also extends into the injection molding industry. For now, though, Henderson appreciates what the additive manufacturing process has yielded. “Going this route allowed us to get into the marketplace and see how the Scanmate Flex would be accepted,” Henderson says.

Henderson even believes the additive manufacturing processes offered at ProtoCAM could be useful in some of DGH’s other product lines. “When we toured the ProtoCAM facility, we observed some interesting techniques and processes, including 3D printing capabilities, that could be used in the manufacturing of some of our other product lines,” Henderson says. In fact, ProtoCAM is currently working with DGH on examining another housing to determine if a switch to a 3D printing operation as opposed to the classic machining operations that they currently use would make sense.

As in the case with DGH, additive manufacturing is perfect for creating and finishing product runs of several hundred parts annually. Additive manufacturing and 3D printing are also ideal for design proofing and market testing, as changes can easily and inexpensively be made using the CAD software involved in the process. Additionally, additive manufacturing provides the design benefits of being able to produce thicker walls, complex geometries, and other aspects which tend to be more difficult to accomplish with injection molding. With a multitude of finishing techniques, design processes, and print styles available, ProtoCAM is an ideal source for low to mid-volume production runs.

To learn more about DGH Technology and its products, visit http://dghtechnology.com/. For more information about the Scanmate Flex, click here.