In April of 2017, ProtoCAM received their first Hewlett Packard Multi Jet Fusion (HP MJF) unit and became a part of the future of additive manufacturing.

As the anniversary of the implementation of our MJF printer approaches, we’re looking ahead to what new materials, processes, and systems are on the horizon for the HP MJF printer line.

Advances in this revolutionary printer revolve around bringing 3D printing from the manufacturing industry (where it has already transformed the way products are produced) into industries that are involved in every aspect of human life – medical, the food industry, dentistry, and more. 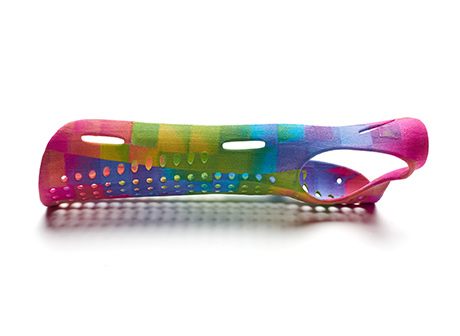 On the short term, we see the release of new materials, including glass-filled (glass bead) material and PA-11. The highly anticipated 500/300 Series 3D printer system, which can print in black, white, and full color, was just recently introduced this February. These advances will expand the capabilities of the MJF user to allow for options in aesthetics and properties for customizing their end products beyond the initial 3200 and 4200 MJF systems.

On the subject of materials, there are many more products in development for the current and future MJF systems. There is a thermoplastic elastomer material in the pipeline, along with polypropylene and a fire-retardant material. With HP’s embrace of third party development (or “open platform”), they are able to have several products in the works at once while also implementing quality controls and minimum performance requirements before products are certified and released. As new powder materials are created, HP works to develop the fusing and finishing agents that are crucial to the MJF process and the unique, crisp details that define MJF parts. 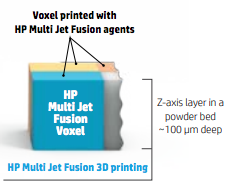 A MJF voxel; courtesy of HP.com

With the expansion of new agents and new materials, along with the continued development of increased control over build set-up, we’ll see the ability to manipulate builds at the voxel level. The agents used in future units could increase from the two used in the initial systems to six, eight, or more to allow for more end-product material properties like conductivity, translucency, aesthetics, flexibility, and more. Because 3D printing itself allows for such flexibility in manipulation of the elements in a print, as MJF technology advances, users will ultimately have control over and be able to manipulate every step of their builds and all properties of the end product.

As this technology continues to evolve, we will see increased usability of MJF in many different industries, including medical, dentistry, food, defense, and more. HP’s High Reusability PA 12, the material used in the 4200 MJF unit, is a biocompatible material, so it’s rated for skin contact devices and can be used in medical prostheses. Another PA 12 material developed by one of HP’s partners, Evonik, is FDA certified for use in the food industry. As capabilities increase, this printer could find a home in every industry – developing models, being used in assemblies, allowing for on-the-spot production, and more.

HP MJF technology has truly transformed the additive manufacturing industry, and will continue to push the boundaries of what’s possible as research and development enduringly produce new materials, agents, properties, and systems. We can’t wait to see what’s next!

Thank you to the experts at Cimquest for your input and feedback for this article.