Ron Belknap didn’t plan to go into engineering – and he certainly didn’t plan to start his own additive manufacturing company. Once he started on both paths, however, there was no turning back. 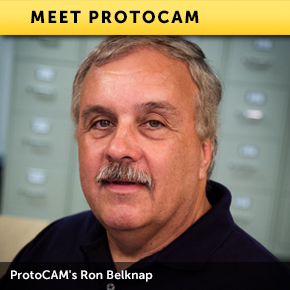 Belknap – ProtoCAM’s President and CEO – grew up on a farm in upstate New York, and always preferred building things to sitting in class. Even back then, he worked at a faster pace than most. Not one to be deskbound for long, the idea of going to college had barely crossed his mind, and when it did, he saw an associate’s degree, at most, in his future.

It was a high school guidance counselor who approached him with the idea of applying his brainpower and exceptional work ethic to a four-year engineering degree at Clarkson University rather than the two-year schools he had been considering. The hands-on skills involved in engineering appealed to Belknap, and he jumped at the chance to try something new. He excelled.

After earning his bachelor’s from Clarkson, Belknap entered the industrial pump industry. He worked his way through the ranks at Goulds Pumps before earning his master’s in manufacturing systems. By 1991, he had put roots down in the Lehigh Valley, working for Ingersoll Rand and raising a family. Just three years in, the company announced a wholesale move to Virginia, and Belknap was floored.

Rather than relocate, Belknap and coworker Ray Biery hatched a plan – a plan that became ProtoCAM.

Belknap and Biery brainstormed just about every business concept they could think of – they even considered a lawn mowing business – until they hit on something that resonated with each of them. Belknap had used subcontractors for 3D printing peripherals in the past and saw an opportunity to actually improve on the process.

From the very beginning, ProtoCAM was based on the idea of exceptional customer service. Both Belknap and Biery were dedicated to making the company a leading provider of quality rapid prototypes on time and on budget. It’s a philosophy that continues to this day.

“Customer service is king to us,” Belknap said. “We do crazy stuff for our customers because we know that good service today will bring in an order tomorrow.”

Service doesn’t end with the customer. ProtoCAM has an incredible employee retention rate at a time when industrial and manufacturing engineers are in high demand. Despite the short deadlines, tight turn-around times and relentless speed of the additive manufacturing industry, Belknap has fostered “work hard, play hard” values and encourages team members to make ProtoCAM their home away from home. He knows from personal experience working under a wide spectrum of bosses that a satisfied team works harder, faster and better.

“We’re at work more waking hours than we’re at home and I want my team to enjoy being here – to come to work, work hard, have a good time doing it, and go home happy,” Belknap said. “It isn’t about putting in eight hours and punching out. It is about getting the job done whatever it takes, and, to be honest, it takes a team that likes working together.”

From Prototyping to Manufacturing

As ProtoCAM enters its third decade, Belknap is pushing the team to step up their game in a rapidly changing industry. The loss of ProtoCAM’s original building and most of their machinery to a massive fire in 2013 could have been a mortal blow for the company, but Belknap struggled through the excruciating process of bouncing back by keeping his eye on what the future could hold.

“I knew if I wanted ProtoCAM to make it past the fire, it was going to take a whole new vision,” he said. “The Lord has been kind to us and we have been very fortunate. At the same time, I believe we make our own luck. As painful as rebuilding was, it became an opportunity to reevaluate the business as a whole.”

Belknap’s strategic vision has gone from maintaining the status quo to aggressively rebranding and reinvesting intellectual and physical resources in new industrial additive manufacturing technologies. Those new technologies are what really energize Belknap and the entire ProtoCAM team.

“We’re seeing engineers changing the way they design their parts specifically with additive manufacturing in mind,” Belknap said. “We just made a nozzle for the air intake on a diesel tractor that improves performance in ways never before attainable, and you literally can’t make it any other way.”

Consequently, because of Belknap’s eagerness to adapt, ProtoCAM is capitalizing on the evolution happening in the market. The goal: Revolutionizing what the company can do for existing customers as well as new customers.

“Our industry is in transition,” Belknap said. “Advances in processes, machines and materials mean we can expand beyond prototyping and deeply into rapid manufacturing of end-use parts. ProtoCAM is not only exploring but also helping to develop and fine-tune the latest additive manufacturing technologies.”