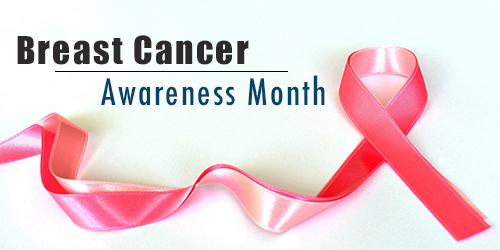 October is Breast Cancer Awareness Month, and here at ProtoCAM, breast cancer awareness is a topic we hold dear to our hearts. Many members of the ProtoCAM team have friends and family who are breast cancer survivors, and as such, we have a special interest in the continued evolution of prevention, detection, and treatment of this life-changing disease. The continuous advancements made in the 3D printing and additive manufacturing industries represent one aspect of the medical innovations being developed to treat and help prevent breast cancer.

These facts are staggering, but as medical advancements evolve, the rates of diagnoses and deaths are decreasing. In recent years, perhaps coinciding with the decline in prescriptive hormone replacement therapy after menopause, the National Breast Cancer Foundation has seen a gradual reduction in female breast cancer incidence rates among women aged 50 and older. Death rates from breast cancer have been declining since about 1990, in part due to better screening and early detection, increased awareness, and continually improving treatment options.

3D printing is helping at the forefront, with prevention of the disease. North American medical startup Marvel Medtech is utilizing a 3D printer to build key components in tools (a ceramic cryotherapy probe) for fighting breast cancer. The company utilizes these components with XJet’s Nanoparticle Jetting technology to freeze and destroy the most dangerous tiny breast cancer tumors and prevent them from growing. Marvel Medtech recognized the value of MRI for detecting breast cancer, and began to use the technology to identify the disease in its early stages, allowing for the cancer to be detected whilst it is still curable. After discovering this was possible, the startup progressed its solution from detection to treatment, realizing that MRI mapping could be used to guide minimally invasive treatment procedures to destroy onset tumors, using cryoablation.

(Courtesy of University of Twente)

Earlier and easier detection of breast cancer is also being made possible via 3D printing. Researchers at the University of Twente (UT) in the Netherlands teamed up with Ziekenhuis Groep Twente to implement the 3D-printed Stormram 4, a robot created especially to collect cells for breast cancer biopsy. According to these researchers, it is not possible to achieve this robot’s rate of precision by hand. With the MRI Data method, the formation of cells within the breast can be efficiently mapped, and then the data gathered can be used to guide a needle for sample cell collection, the latter of which can be done more efficiently when performed mechanically.

For breast cancer survivors, myReflection is using 3D scanning and 3D printing molds to create customized prosthetic breasts for cancer patients who have received a mastectomy. This New Zealand-based start-up is making these prostheses from a 3D torso scan and designing them using an ISO-certified outer silicone and an inner core. Tim Carr conceived of the prosthetics as he witnessed the difficulties his wife was having with other breast prosthetic devices, and decided to create a better solution. “It’s not just a blob. Everyone think that about prosthesis, but it’s not–it’s a sense of completion,” says Carr.

Here at ProtoCAM, we’re always seeking to continuously improve our 3D offerings and additive manufacturing resources for our medical customers and all others, not only to help in the fight against breast cancer, but to assist in all medical areas, including the current COVID-19 pandemic. We look forward to continuing to participate in the revolutionary and ever-evolving medical advancements being made with 3D printing and additive manufacturing technologies.